I was standing four feet from the stage at the Omni and was being thoroughly entertained by the words and antics of Soldier frontman Jimmy Arceneaux.

The whole band has a totally professional look on stage, but remain aloof and ego-free and appear to be genuinely having fun up there. And I was having tun just watching them.

Singer Jimmy Arceneaux views the audience as a personal challenge and hates to see anyone not getting into the show. He pours his heart out on songs such as “Deadly Weapons,” a tune about spiritual warfare and the age-old battle between good and evil, and the newer cut “Tears,” which Jimmy describes as “kind of a love song.”

“We’re just a band that goes out there and we do a good show and people say, Wow, there’s something different about you.” I don’t think we ever want to get to a point where we get so calculated that people come and see us and say, ‘Didn’t they do this show last week?’”

Up until a couple of months ago, Soldier’s line-up was completed with guitarist Rick Hunter, bassist Marc Allyn, and drummer Al Whalen, but Jason Sousa has recently replaced Whalen. Jason Sousa came to Soldier from Tony MacAlpine’s band.

As I sat with Jimmy and Marc in Soldier’s dressing room, I found the pair intelligent and articulate, but I found that I knew next to nothing of guitarist Rick Hunter.

“Rick, the first time he came over,” says Marc, “he sat on the couch and didn’t say a word for about three hours. For the first week it was like, ‘Jimmy, does this guy talk?’”

“The first time we heard him talk,” continues the bassist, “we were sitting in a restaurant; we’d been there for about half an hour and hadn’t gotten any service. The restaurant was totally quiet and nobody has served us and Rick goes, ‘Does anybody work here?!’”

“All these waitresses came hurrying over, ‘Can I help you?’ ‘Can I take your order?’”

Soldier got a surprising response after they recorded their first half-live, half-studio album. “There are a lot of people,” says Jimmy Arceneaux, “in foreign countries and other parts of the United States, that love the band and the first tape generated so much…” he pauses, searching for the right phrasing.

“Yeah…a lot of people just went crazy for it; and I can’t stand it, I can’t even fasten to it — but people just go, ‘Yeah! This is the one! You guys gotta record again.’”

“The recording is really bad,” picks up Marc, “plus the nightmare of it was that we had to drive four hours up to the studio and it was 4 o’clock in the morning.”

“There’s one thing good about that tape,” admits Jimmy Arceneaux, “you can tell there’s an anger in the studio stuff.” 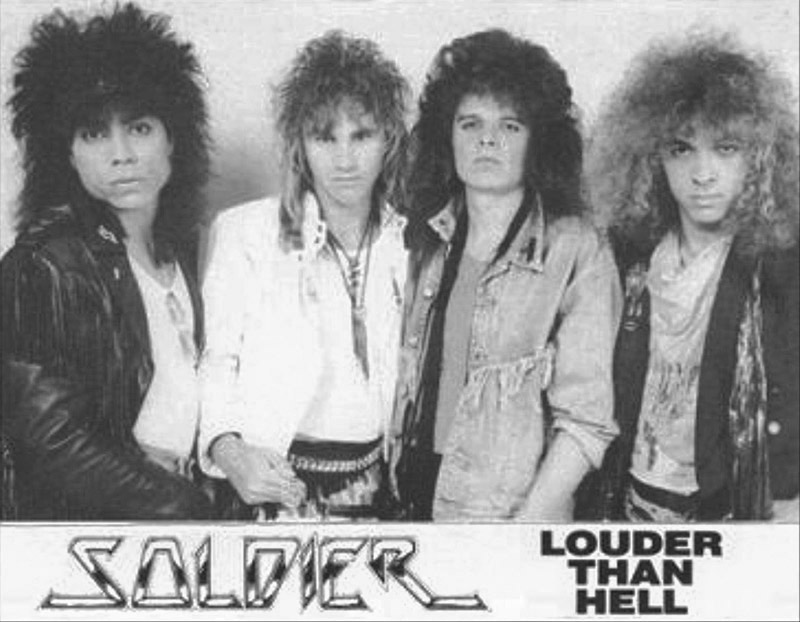 Soldier’s album, Babylon, has made quite a name for the band on the local front. The album contains ten lively cuts and an intro track called “Babylon” listening to the tape makes me think of what Soldier could do with a good producer.

Music and lyrics are a band collaboration, but Jimmy is quick to say that Marc “writes the best lyrics.”

Jimmy Arceneaux seems to become inspired at the strangest and most inopportune moments, and he has recently taken to sticking little yellow Post-it note pads on his steering wheel.

“I’ll be riding down the street and I’m writing y’know? Most of the time I don’t even look, I can read my own sloppiness.”

Marc laughs as he relates that he sometimes writes to the beat of a clicking tire on the forklift he drives as a day job, or “sometimes I wake up in the middle of the night and write.”

Look for Soldier’s tunes “Tears” and “Borderline” to appear in the near future on California Metal II, an Enigma/Regency compilation which will feature seven California rock acts, a couple of which, like Soldier, provide two tracks.

Go to see Soldier not only because they are stunning and extremely entertaining on stage, but because you might be able to talk to them at the bar, and they are quite funny guys.

Marc and Jimmy both told me that the Omni in Oakland is like their “second home,” so check Soldier out.