Kahne was immediately impressed. CBS financed two Stiletto demos over the summer, recorded at The Big House studios in San Jose. The band produced 14 songs in all for CBS, and at one point considered bringing in a fourth member, to take over the lead vocals from bassist Dave Major.

Major, along with guitarist Mike Jerant and drummer Mark Shevetone, traveled to LA to audition some singers. “It just wasn’t the same,” said Jerant “We really like the sound of Dave’s voice ’cause it’s so different and we like being a three-piece because that’s kind of different. Finally we just decided it wasn’t worth it. It’s just not cool to say, ‘Maybe we’ll get signed if we get this guy…because they [the label] want it.’ We figure we can either make it the way it is now or it’s not worth it.”

Eventually CBS decided that Stiletto’s brand of neo-metal was a bit too alternative, even for the label’s more adventurous subsidiary 415 Records.

But Stiletto’s particularly hard-to-place sound is their trademark; a tour de force that keeps them unique. Stiletto has been labeled as a band that cannot be labeled.

“There are a few bands who can do it,” related Jerant, “like Zeppelin or the Beatles or whatever. For one example you could say Metallica, or in a mellower area, say, the Scorpions. I like both of those bands but they’re pretty much set in their own mould. They’ve changed, the Scorps have changed tons over the years, but that was mainly because of different members who came in. If you look at their albums, especially the last few, it’s almost like they’ve got this mould, and they just keep churning them out. There’s not a whole lot of variation there, whereas we would like to be more of a band like Zeppelin or something where each album is really different.”

“There are a few bands that can do it,” he goes on, “but a lot of the time, like when the new Metallica came out, the fans really expect that sound, and if they stray too far from it…”

Stiletto no longer worries about their sound, they just go with the flow, but they do have certain safeguards that help them from falling into the kind of traps they dislike.

“We were constantly saying to ourselves, ‘Where are we gonna direct ourselves and what are we gonna be?’” said Major. “I think that was the whole problem at first; we were trying to second-guess what everyone wanted and I think that in the end we decided to just fuckin’ crank out the tunes. Just take ’em for what they are.”

Stiletto first established themselves locally by releasing a self-produced LP on independent label Azra Records several years ago. Blame It On Youth was originally intended to be an EP, to be released on Belgium’s once-established Mausoleum Records. However, the label went bankrupt and Stiletto turned to LA-based Azra.

“We know that nobody makes money on a label of that size,” admitted Jerant. “We just wanted to do it for the exposure and to have a piece of vinyl out there.”

The material that comprises Blame It On Youth was actually culled from two separate demos, plus an extra track and a guitar solo compliments of Mike Jerant.

But that wasn’t the band’s first vinyl appearance. They debuted on the New Renaissance Records compilation Speed Metal Hell and are featured on the recently released San Jose Rocks! Volume One compilation album. 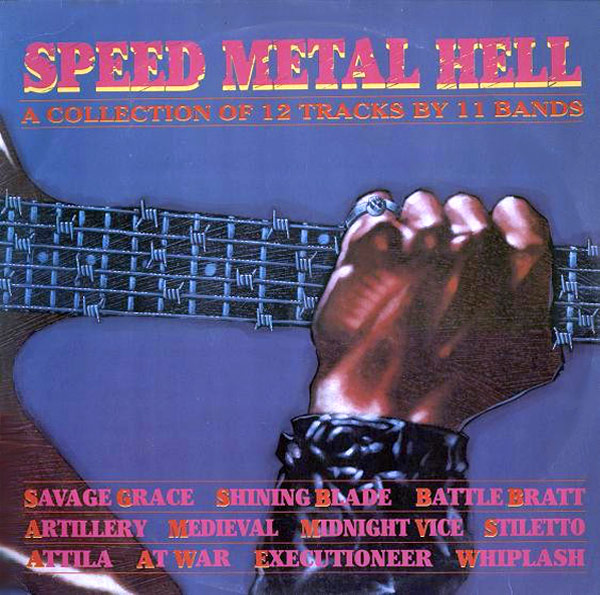 With close to 40 recorded and unrecorded songs under their belt, Stiletto are currently working steadily on new material while Roger Perry continues to shop the band’s most recent demos to the major labels.

“I think there’s definitely a strength in the music,” said Jerant. “We could make the most killer album by pulling songs from our old stuff alone, but obviously we would re-record it.” All they need is a good record contract.