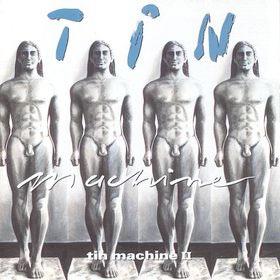 David Bowie and his band’s label, Victory Music/Polygram, caved in to pressure from unnamed American retailers who refused to rack Tin Machine’s latest album, saying that the cover was offensive and could cause trouble from “irate mothers.”

The album cover pictures Kouroi — ancient Greek statues of unclothed men which once stood for perfect balance. The genitalia of the statues was airbrushed out of the domestic version of the album, Tin Machine II. The uncensored version is pictured here.

Although the statues are on display in museums in cities all over the world (Greece, New York, London, Los Angeles, and others), 60 percent of the retailers shown the cover artwork before the album’s release said they would not stock it unless the art was changed. Ironically, many of those same retailers stock classical recordings by Bach, Beethoven, Shutz, and others whose packaging features males and females in similar states of partial or total undress, according to Tin Machine’s publicist.

“I’m not proud of my decision,” said Victory Music president Phil Carson, “but retailers don’t want to deal with a bunch of irate mothers.”

Bowie’s comment: “Such a big noise over such a small thing, so to speak.”

Gannett Outdoor, the company which rents billboard space on Los Angeles’ Sunset Strip, recently rejected a placement of an ad for the album. The band members responded, “There are so many pricks in Hollywood, we didn’t think they would notice four more.”

Censorship of album covers by recording companies dates back at least as far as the 1960s and ’70s, when covers of albums from The Beatles and John Lennon were changed, fearing fundamentalist or right-wing backlash. Many other artists’ album covers — from the ’60s through the ’90s — have been censored: 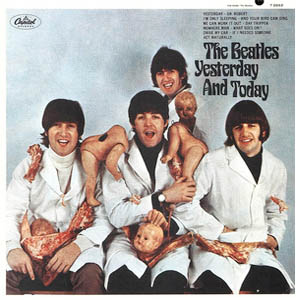 Alice Cooper’s latest album, Hey Stoopid, originally featured a much more drastic depiction of the instruments of drug use and abuse, revealed the performer in August. The photo on the cover had to be nixed in favor of a more plasticine depiction of “success,” instead of “excess,” according to Cooper’s publicist.

The decision to change the artwork was made by Cooper and his management, based on the fear that many retailers would likely not want to stock the album if the cover portrayed hypodermic needles, razor blades, and smashed bottles of Jack Daniels whiskey.

The move to change the sculpture pictured on the original cover, created for Cooper by artist Mike McNeilly, was reportedly sparked by pressure and original concerns voiced by officials at Epic Records, Cooper’s label. 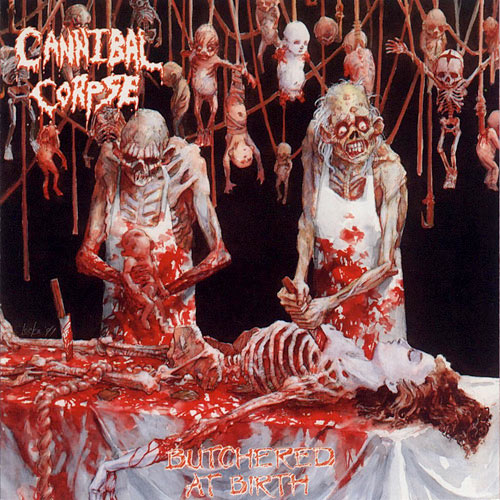 Death metal band Cannibal Corpse has had its second album’s cover rejected by retailers in Europe, forcing label Metal Blade/Music For Nations to issue Butchered At Birth in a plain red sleeve, with the original cover (pictured above) printed on the inside.

TCA Cable TV has decided to return MTV to many of the six states it serves after demonstrations and protests convinced the conglomerate to return the network to the airwaves.

TCA Cable announced earlier this summer that it would be dropping MTV from its offering to cable subscribers in Texas, Idaho, New Mexico, Arkansas, Louisiana, and Mississippi. The cancellation of MTV in those states made the music network unavailable to an estimated 420,000 viewers.

“We’ve had so many complaints from teachers groups, city council, parents groups, that we realized [that MTV is] not suitable for a general audience,” said TCA Chairman Robert Rogers.

According to MTV Networks CEO Tom Fretson, MTV has “received a letter from Nichols complaining about satanism, violence, and sexual activity in music videos. We don’t allow demonic depictions on MTV. Our standards are virtually identical to the networks’.”

But more recently, protests in the cities of Amarillo and Conroe, and at Texas A and M University, convinced TCA to bring MTV back into certain markets, reported Rock Out Censorship in August.